Where wast thou when I laid the foundations of the earth? declare, if thou hast understanding.

They know not, neither will they understand; they walk on in darkness: all the foundations of the earth are out of course.

Who laid the foundations of the earth, that it should not be removed for ever.

When he gave to the sea his decree, that the waters should not pass his commandment: when he appointed the foundations of the earth:

And it shall come to pass, that he who fleeth from the noise of the fear shall fall into the pit; and he that cometh up out of the midst of the pit shall be taken in the snare: for the windows from on high are open, and the foundations of the earth do shake.

Isaiah  40:21(KJV)
Have ye not known? have ye not heard? hath it not been told you from the beginning? have ye not understood from the foundations of the earth?

No humans were around to witness the foundations of the Earth in any of the creation paradigms but lKerr does describe humans as tiny spirits inside God during this process so they could have ‘understood’ from that point.

And I have put my words in thy mouth, and I have covered thee in the shadow of mine hand, that I may plant the heavens, and lay the foundations of the earth, and say unto Zion, Thou art my people.

Thus saith the LORD; If heaven above can be measured, and the foundations of the earth searched out beneath, I will also cast off all the seed of Israel for all that they have done, saith the LORD.

Hear ye, O mountains, the LORD'S controversy, and ye strong foundations of the earth: for the LORD hath a controversy with his people, and he will plead with Israel

Please note again, each of these verses are only links with Genesis 1:1-stretching out the universe-and possibly with Genesis day 6. There is no link or association with Genesis days 1-5. I suggest that is because days 1-5 although significant in many aspects just do not demonstrate re-reference in the text often enough (though the whole 7 days do) to class as a main topic in the Bible (if main topics are decided by the number of mentions in the Bible or volume of text)

Ground Zero for the redemption plan 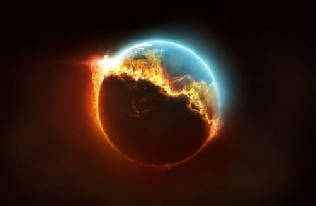 The Foundation of the Earth

(Does it have a precise meaning? Is it synonymous with the Foundation of the World? Does it link with Genesis days 1-6?) -YES-NO-NO.

I believe the majesty of the King James Version is unparalleled and am happy to use its translation. However, I believe the Bible uses specific words for specific meanings and with consistency across the whole Bible.

By studying the context of the words a conclusion can be drawn from their meanings.

Translation is not always an exact science when dealing with the English language as it does have some limitations especially when compared to the precision of the Greek.

So, the Greek ‘ge’, ‘aion’, ‘oikoumene’ and ‘kosmos’ may all have different meanings and may all be translated as world. The English translation gives constraints to the meaning. In some cases the original translated Greek or Hebrew word must be known to fully understand its translated meaning.

The standard definitions are:

Aion: the current era, a length of time on Earth, an age. Worlds. eternal, everlasting, forever.

Oikoumene: World, It occurs 15 times and always means an inhabited part of the world,

The Greek words ‘themelios’ and ‘katabole’ are translated as foundation in the New Testament.

Themelios: To lay down a foundation, e,g, a building, beginnings, a substructure literally or figuratively

Katabole: The literal meaning is to throw down and a founding. Or an injection of semen into the womb. It is where the word catabolic originates. To break down.

‘Katabole’ occurs 11 times and is translated as foundation 10 times and conceived once. This is a lt of mentions and is, therefor, I believe significant.

‘Katabole’ is the only word used in conjunction with ‘kosmos’ and is always used when the term ‘foundation of the world’ is used.

There appears to be no single English word that can be used for ‘katabole’. It contains two elements. The first is an element of throwing something down or breaking something up followed by a new beginning. But perhaps the closest English would be to use the phrase ‘an ending then a new dawning’. Or maybe just the term ‘new dawning’ which itself implies a previous ending.

I will not consider ‘themelios’ and ‘oikoumene’, whose meanings are clear and do not impinge on this analysis.

So with these definitions in mind.

Foundation of the Earth in the New Testament

10  And, Thou, Lord, in the beginning hast laid the foundation (themelios) of the earth (ge); and the heavens are the works of thine hands:

In view of the definitions above ‘foundation of the earth’ must mean the creation of planet earth, the ‘big ball’. There is no ambiguity of meaning here. The verse also links directly with Genesis 1: timeline with the common usage of  ‘in the beginning’. See the page ‘seven beginnings’ on this site here.  So, if ‘in the beginning’ is a specific time then whenever ‘in the beginning’ was, then that was when God laid the foundations of the Earth. Or ‘in the beginning’ does not appear to be a ‘katabole kosmos' event

Please note this does not link the laying of the foundation of the earth with the rest of Genesis but just verse 1.

Hebrew Words for Earth and foundation and their Translations

Tebel: world: used 35 times for world and once as the inhabitable part of it

Mowcadah: Foundation. Is used 10 times just as foundation as we would understand it

Foundation of the Earth in the Old Testament

The term ‘foundation of the earth’ again, as with the Greek, has  plain meaning, the time or visual description of the Earth being made or what the foundations look like. There seems to be no ambiguity.

Of old hast thou laid the foundation of the earth: and the heavens are the work of thy hands.

Mine hand also hath laid the foundation of the earth, and my right hand hath spanned the heavens: when I call unto them, they stand up together.

The burden of the word of the LORD for Israel, saith the LORD, which stretcheth forth the heavens, and layeth the foundation of the earth, and formeth the spirit of man within him

Please note, again, these verses do not link the laying of the foundation of the Earth with the rest of Genesis but just verse 1. All other instances of the use of foundations of the Earth seem not to be connected to Genesis 1;3-31 but only with Genesis 1:1Note how the psalm links to a time of ‘old’.

Note how Zechariah brings together the Heavens being stretched, forming the earth and imparting the spirit of man into him, three big and separate events, no mention for the rest of Genesis 1 3-31 there. It is not clear who the him refers to-God himself or man? Zechariah may be referring to forming us as spirits inside God himself to later implant into our bodies, confirming Kerr’s revelation.